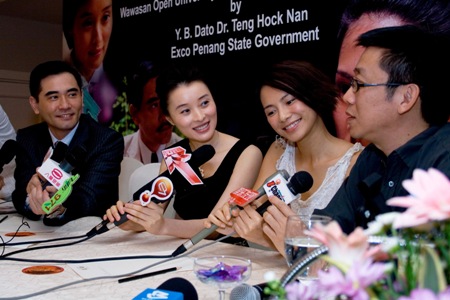 THE MAIN STARS AND THE DIRECTOR, DEREK CHIU, ANSWER QUESTIONS ABOUT THEIR MOVIE.

The artistes from Road to Dawn made an appeal to all Malaysians to contribute generously to the Wawasan Open Universityâ€™s Chancellorâ€™s Scholarship Fund in the Press conference.

The Chancellorâ€™s Scholarship fund received donations of RM 1 million each from the the Yeap Leong Hai and Yeap Leong Chooi trusts.

The E&O Group sponsored a total of RM1 million towards establishing the WOU-E&O Chancellorâ€™s Scholarship Fund during the WOU-Road to Dawn Premiere Tea Party held after the Press Conference.

Later that evening, the Charity Premiere of the movie Road to Dawn drew a huge crowd to the Golden Screen Cinema, at Gurney Plaza in Penang. The event was graced by the glamorous appearance of the three main stars at the first public screening of the film. The Chief Minister of Penang, YAB Tan Sri Dr Koh Tsu Koon officiated at the Charity Premiere.

In the shift to a learner-centric approach, educators...

The passion for volunteerism and philanthropic spirit is...

As with any graduates, Deanmozhi Seetha Pathi was...

The University had the highest number of graduating...

With the exception of trips to the zoo,...