The event titled ŌĆśThe Legacy of a True Malaysian – A Tribute to Tun Dr Lim Keng YaikŌĆÖ was held to commemorate and celebrate the life and legacy of Tun Dr Lim, the second Chancellor of WOU and a former President of Parti Gerakan.

As a mark of respect, the emcee led everyone to stand and observe a minute of silence in remembrance of the great leader who passed away on 22nd December 2012.

The first speaker for the morning was WOU Vice Chancellor Prof DatoŌĆÖ Dr Ho Sinn Chye. He said Tun Dr Lim will always be remembered as the founder of WOU for having the vision to set up a virtual open university, and subsequently bringing in key people and the funds needed to translate that vision into reality.

ŌĆ£He was determined to make higher education more readily accessible and affordable to more Malaysians. He wanted to add value to the lives of working Malaysians by offering them an opportunity to obtain a higher degree or qualification, irrespective of gender, race, religion and socio-economic background. His approach was to make the ŌĆśpieŌĆÖ bigger rather than forcing the population to fight for a smaller piece of the pie,ŌĆØ added Prof Ho.

He said that Tun Dr Lim wanted WOU to become self-supporting within 10 years and that the University is trying its best to meet this target. Prof Ho continued that the late Chancellor ŌĆ£made it very clear from the beginning that although the Wawasan Education Foundation (WEF) and Parti Gerakan own the University, neither the Party nor the Foundation will interfere with the day to day operations of the University especially with regard to academic affairsŌĆØ.

Prof Ho concluded his speech by expressing the UniversityŌĆÖs and his personal gratitude to Tun Dr Lim for his life and deeds. 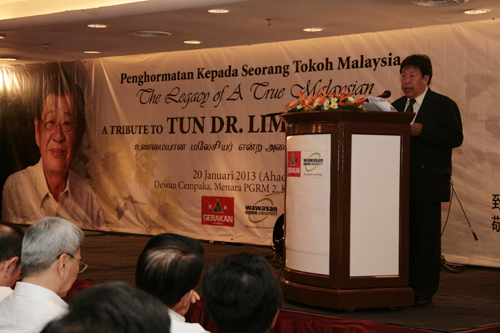 This was followed by a brief video-clip on Tun Dr Lim, which brought many in the audience to tears. The video captured him performing his many roles and carried notable sound bites from his speeches, and ended with his duet of the song ŌĆśOnly YouŌĆÖ with his wife.

Meanwhile Parti Gerakan President and WOU Pro-Chancellor Tan Sri Dr Koh Tsu Koon recounted his first meeting with Tun Dr Lim while a university student in 1972. He went on to state what a selfless and no-nonsense leader Tun Dr Lim was. He said words were not enough to describe the sense of loss, sorrow, but at the same time, gratitude, felt by the Party, University and the country. ŌĆ£We were given a true Malaysian, a great leader with a big heart.ŌĆØ He called everyone to emulate Tun Dr LimŌĆÖs ŌĆ£spirit of sacrifice, spirit of commitment and his spirit of working with the peopleŌĆØ.

Datuk Lim Si Pin said his late father wanted to be remembered as a true Malaysian, and was always concerned over party matters and WOU. Tun Dr Lim, he said, had the philosophy of ŌĆ£putting others first, putting himself lastŌĆØ. He shared that his father was motivated to set up WOU as he had faced financial difficulties towards the final years of his university education in Belfast. He declared, ŌĆ£My dad had high hopes for Dr Koh to carry on his work at WOU. He always wanted WEF and WOU to work together.ŌĆØ

A photo exhibition of Tun Dr Lim from his early days until his demise was held at the event hall to give a better glimpse into his life.

Companies must strategise to minimise the impact to...

Endless Support in a Diverse Community at WOU

The university values diversity and welcomes all students...

Every stage of life has its own set...

Being a Certified Construction Project Manager (CCPM) is...

Leaders must develop a work a culture that embraces digital transformation

Leaders must create a change culture and promote...