Having fun at WOU-DISTED Family Day

About 200 staff of WOU and DISTED College and their family members had loads of fun at the joint Family Day held today at the WOU main campus.

WOU Vice Chancellor Prof Datoâ€™ Dr Ho Sinn Chye gave his welcoming remarks and launched the half-day gathering. Kicking off the Family Day was a song presentation by a group of WOU full-time degree students, followed by a solo high-energy breakdance performance by one of the students.

A host of exciting games and activities were lined up to add to the merriment. The kids were not forgotten as they got to show their creative talents in a colouring contest and received animal-shaped balloons from â€˜Jack the Clownâ€™.

WOUâ€™s full-time students organised the games, namely â€˜ping pong in the cupâ€™, â€˜hook the fishâ€™, â€˜separate the beansâ€™, and â€˜pin the moustacheâ€™ on a picture of Justin Bieber. The WOU students had crafted a unique photo booth for taking selfies in remembrance of the Family Day.

Another highlight was the hilarious â€˜dress-upâ€™ completion that saw four brave volunteers being dressed up elegantly by team members in colourful sarees. The top prize for the contest â€“ judged by the spouses of WOUâ€™s Prof N V Narasimham and Prof Phalachandra Bhandigadi â€“ went to the team from DISTED while second prize was won by WOUâ€™s full-time students. 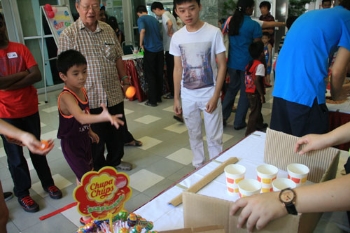 PARTICIPATING IN THE ‘PING PONG’ GAME.

On hand to present the 33 lucky draw prizes were Prof Ho, WOU Chief Administrative Officer Yeong Sik Kheong and DISTED College President Dr Seah Soo Aun. The first prize, a one night stay for two at Flamingo Hotel Penang went to the daughter of WOU staff Latha Palachandran, while the second prize, a buffet lunch for two at Evergreen Laurel Penang, was won by Trinnie Triveny Chandran, also of WOU.

Companies must strategise to minimise the impact to...

Endless Support in a Diverse Community at WOU

The university values diversity and welcomes all students...

Every stage of life has its own set...

Being a Certified Construction Project Manager (CCPM) is...

Leaders must develop a work a culture that embraces digital transformation

Leaders must create a change culture and promote...